In Nicetown, a North Philadelphia neighborhood that was redlined in the 1930s, banks and mortgage brokers largely stay away. Lenders have been particularly stingy when it comes to home improvement loans. CREDIT: SARAH BLESENER FOR REVEAL NEWS

The financial industry is evolving quickly, but unfortunately it has remained static in one major way: Its leadership looks nothing like America.

That’s bad for communities of color, who will be the American majority in roughly 20 years, but it’s also bad for our whole economy.

At The Greenlining Institute, we regularly look at board and workforce diversity in agencies and private institutions across multiple sectors of the economy, including banks. In 2019, we studied the boards of directors of the ten largest banks operating in California, where we are based, and found that on average, people of color made up 30 percent of bank board composition, despite making up over 67 percent of California’s population.

Gender diversity was equally lacking, with women making up only 29 percent of bank board members. None of the 10 huge banks that we studied had more than 36 percent women board members.

These executive boards are the top decision-makers in financial institutions and drive the policies that ultimately impact our communities. Boards are accountable for the actions and behaviors of their institutions. They set the direction those institutions will go.

And those institutions often still don’t go in directions that help communities of color. My organization’s name, The Greenlining Institute, came from our founding purpose as the answer to redlining, the longstanding practice of denying loans and investment to communities of color. While long illegal, recent investigations by the investigative news organization Reveal found that redlining has not gone away; it persists in more subtle but still destructive forms.

Get our best delivered to your inbox.

On an annual basis, we request data from national institutions that operate in California. We track and rank banks on indicators that impact communities of color.

We consider transparency to be critical because data gives the public a full picture of the diversity and inclusion — or lack of it — within financial institutions, helping to keep them accountable to communities of color and inform data-driven policymaking.

Unfortunately, we regularly experience difficulty in obtaining such data, making it much harder to produce fair and thorough research and hold banks accountable. We believe that such data should be disclosed voluntarily by financial institutions, but Congress has a role to play as well.

We’re concerned about regulatory barriers that prevent banks from effectively serving low and moderate-income communities and communities of color by preventing banks from collecting and disclosing race data to the public. We urge lawmakers to look to existing regulations that require government agencies and private institutions to disclose data on diversity and inclusion practices.

Section 342 of the Dodd Frank Act created Offices of Minority and Women Inclusion in eight agencies. These OMWIs have worked to build up a robust infrastructure that includes internal assessments, crafting strategic plans, and increase diversity in their large agencies. This represents a good beginning, but we need more transparency from the banking industry itself. And we definitely need to look at the largely unregulated Fintech industry, which appears to be even less representative of our country’s diversity than conventional banking.

Our work is licensed under a Creative Commons Attribution-Share Alike 3.0 License. Feel free to republish and share widely. 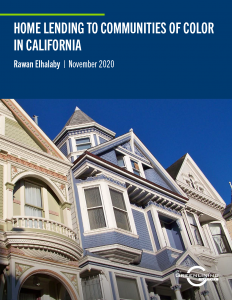 Protected: Home Lending to Communities of Color in California