As COVID-19 has pushed many Americans online to work and attend school, we hear a lot about Zoom fatigue and other annoyances. But what about the tens of millions of Americans who either have only limited internet access at home, or no access at all?

Lack of internet access in some households and communities has long been a national problem. The pandemic has turned it into a national crisis.

Millions of American can access the internet only through smartphones. That’s better than nothing, but plagued by serious limitations: Data caps and slower speeds greatly limit what users can do. And some important tasks — like filling out complex applications for employment or college admission — are much harder, given the limits of a tiny touch screen.

The nonprofit group where I work has been talking to folks here in California and elsewhere about life on the wrong side of the digital divide, which makes everything harder, especially education. We spoke to a high school student taking business classes who struggles to create and upload web design assignments on her smartphone, and an older woman who had to drop out of a professional management course because she had no way to do the course work online.

Fabiola Espitia, a counselor at Chaffey College in Rancho Cucamonga, Calif., told us about a recent high school graduate she counseled who couldn’t take an Advanced Placement exam due to lack of internet access. Others had their education disrupted when the pandemic forced the closing of a campus library, their only internet connection.

Unsurprisingly, the digital divide mirrors economic and racial ones. Last year, a Pew Research survey found distinct patterns in who lacks internet access at home. While 92% of families with a household income of $75,000 or more have a home broadband connection, that figure drops to 56% for incomes of $30,000 and below. While 79% of white households have a home internet connection, just 66% of black households and 61% of Latino households do.

Lack of internet access is a problem in urban and suburban homes, as well as in rural communities. And it is especially destructive when it comes to education. Overall, approximately 12 million students nationwide are affected by this digital divide, putting their futures at risk.

“Schools have shuttered and more than 50 million students have been told to head online for class,” wrote Jessica Rosenworce, a member of the Federal Communications Commission, while dissenting from the rosy conclusions reached by the FCC’s Republican majority in its annual Broadband Deployment Report. “This pandemic has demonstrated conclusively that broadband is no longer nice-to-have. It’s need-to-have.”

COVID-19 has shown us that the digital divide isn’t sustainable if we want all Americans to have a fair shot at success.

The FCC needs to do more to bridge the digital divide, especially in urban and suburban homes. Congress must act swiftly and decisively by providing federal funding to build a future-proof, all-fiber network that reaches every household in the nation, and eliminating state-level bans on communities building their own networks.

Ensuring that everyone in the United States has access to robust, affordable, high-speed internet access should be a national priority.

Gissela Moya is the Manny Garcia Technology Equity Fellow at The Greenlining Institute and co-author of Greenlining’s recent report, “On the Wrong Side of the Digital Divide.” This column was produced for the Progressive Media Project, which is run by The Progressive magazine, and distributed by Tribune News Service. 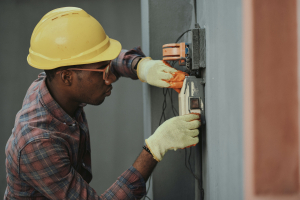 ADUs Must Be Built for BIPOC Communities, by BIPOC [...]