“California is rolling deep, as they say,” said Assemblyman Eddie Garcia, who represents the Coachella Valley.

He was one of the state’s Latino elected officials high on the state’s delegate list, along with Lauren Sanchez, the governor’s senior climate adviser and Senate Majority Whip Lena Gonzalez; many Latino researchers like Michael Méndez, an environmental planner from UC Irvine, attended, as well as, activists, organizers and protesters.

This is not your abuelita’s environmental movement, attendees of the conference told KQED. Young Latino climate activists demand swift action, while leaders of organizations embrace a broader definition of environmentalism.

The focus of this movement, they say, is on how the planet impacts people — especially health, opportunities and environmental justice.

“As an immigrant and a person of Mexican heritage, I felt really proud,” said Alvaro Sanchez, vice president of policy at the Greenlining Institute.

The setup at the U.N.’s annual Conference of the Parties is organized around concentric circles.

At the center of this year’s gathering, countries hashed out details of a new climate change agreement. While some countries committed to more ambitious cuts to heat-trapping pollution, others did not agree to rein in emissions fast enough for the world to avoid the worst damage from climate-driven disasters, NPR reported.

States like California were not involved in those negotiations. But credentialed insiders were allowed access to an inner circle, what attendees call the “blue zone.”

The next circle is the “green zone.” It’s designed to provide limited access and is where experts and advocates lobby and network.

Beyond the official conference and outside the secure area, protesters demonstrate to be heard.

“The idea is that when people are coming in through the blue zone, they see all this advocacy,” said Marce Gutiérrez-Graudiņš, COP veteran and founder of the San Francisco-based ocean conservation group Azul.

Legislators, scientists and big names in the climate world are in the blue zone — as are thousands of people who want to get close to them for some face time. State policymakers are always much in demand by their counterparts from municipal and regional governments at these meetings.

Garcia had access to the blue zone as a member of the state’s official delegation. He said California is an international model for climate policy, adding that the state’s “role at this conference is to continue to be a global leader in climate change.”

Assembly Speaker Anthony Rendon makes the case that California is where new ideas get tested in the real world, proof positive that cutting emissions won’t destroy the economy.

The state generates climate solutions, like electric vehicles, regulations on power plant emissions and original research into the consequences of a warming climate.

But, Rendon said, the California model is not perfect and needs improvement. Millions of Californians drive cars and run air conditioners, producing planet-warming emissions just like other industrialized economies.

“We need to tell the story of what we’ve done,” Rendon said. “But I think we need to do more. [California’s emissions reductions] have not been as as aggressive as I would like them to be.”

Sure, California has lots of ideas to share, the Greenlining Institute’s Sanchez said, but it’s also an oil-producing state where some residents — especially working-class people of color — suffer from extreme heat and air pollution.

Sanchez attended previous COPs as a guest of the state delegation, but watched this one from home.

He and other environmental groups are working with a new generation of climate activists who value rules to protect public health and equal access to nature over traditional conversation priorities, like expanded wilderness protections.

“When we talk about climate, we’re also talking about access to technology and economic opportunity,” he said.

Sanchez emigrated from Mexico City as a child. He and Gutiérrez-Graudiņš both described being shaped by the experience of coming up as the only person of color in the room in California’s traditional environmental organizations.

“It’s so frustrating when I’m in environmental spaces where it’s mostly dominated by white people,” Sanchez said. “It feels isolating to me as a Latino. Often still to this day I’m one of very few people of color in the space.”

Gutiérrez-Graudiņš said the environmental movement will have failed if Latinos, who are 40% of the state’s population, continue to feel this way. But some movement organizers just don’t get it.

“Folks would have meetings in a yacht club in Orange County and wonder why no more people came in,” she said. “There was a lot of like, Hey Marcela, can you bring some like Latinos for this? As if I had baskets of people.”

His goal was to “highlight that the climate crisis is a product of our systems” and to make a point that “it’s not something that we can just grow our way out of.”

Lemus grew up in the shadow of Richmond’s refineries. He said he doesn’t trust that anyone at COP had his interests in mind. That’s why he preferred to get involved in climate justice through direct action.

To Lemus, California is not the model. It’s where city kids get asthma and farmworkers die of heat exhaustion. He worries that his generation will spend their whole lives dealing with climate-driven disasters.

That’s why Lemus got on his first international plane trip to protest at COP26.

Violeta Vasquez, 24, has no interest in international climate conferences.  She said the diplomats, politicians and experts at COP should go back to their hometowns and look at what helps the communities, including Latinos most affected by climate change and the fossil fuel industries.

Her activism lives closer to her San Francisco home, at Hummingbird Farm, a project of PODER in the Crocker-Amazon neighborhood.

Last week, she and a friend moved mulch there, bundling stalks of teosinte, a wild ancestor of maize that native peoples of Southern Mexico domesticated many years ago. She looks to Indigenous peoples who built civilizations around corn, and whose traditions are still celebrated by Mexican Americans,

“Indigenous peoples since before colonization have always been very acutely aware of our relationship between humans and Earth, of needing to live in a harmonious way,” she said.

She says whether it’s through direct action or community gardening, the most effective strategy is one that builds a constituency and demands urgent action.

Sanchez agrees: “At the end of the day, it doesn’t matter whether you’re in Sacramento or at COP. It’s the political capital that you have behind your advocacy that’s going to make a difference,” he said.

He appreciates the energy of young organizers because it keeps the pressure on the decision-makers. And that’s the goal that Latino climate activists all share. 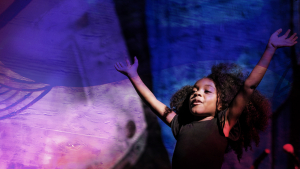 The Audacity to Envision a Just World