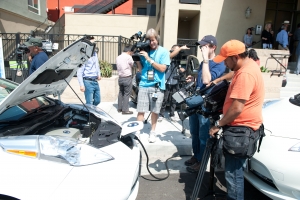 The news has been really depressing lately, from mass shootings to the still-not-convincingly-explained death of Sandra Bland. When you work in public policy, you get used to the fact that you fight lots of battles and lose a fair number of them.

But sometimes you win. And those wins make a difference.

Last year, my colleagues on our Environmental Equity team worked with a coalition called the Charge Ahead California campaign to pass a law called SB 1275, designed to put a million electric cars and trucks on California roads by making them more affordable to low- and moderate-income Californians. Now the benefits of that law are becoming real.

Last week, state and local officials came together in L.A. to announce a pilot electric vehicle carsharing program focused on low-income neighborhoods of central and east L.A. The idea is to make pollution-free cars available to those who otherwise couldn’t afford them, including those who need to drive occasionally but don’t want the hassle and expense of car ownership. Even though it’s just a pilot, this program will improve the mobility of 7,000 low-income Angelenos, while easing the city’s chronic smog problem just a bit.

This is only the start. We hope and expect that funding for programs like this will increase in future years, thanks to smart California climate change policies, energetically supported by Greenlining, that charge polluters and put that money to work in projects to clean the air, with a guarantee that at least one quarter of that money benefits disadvantaged communities.

No, this is not as dramatic as some of the bad news that’s grabbed headlines lately. But bit by bit, these efforts are making lives better up and down the state.
Sometimes you win.