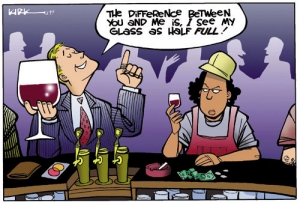 The folks over at WIRED magazine have devoted an entire issue to articles about race and gender, justice, and inclusion, and discuss their reasons for doing so in an article entitled “The Battle for Equality Is a Wired Issue.” The tech industry has a pretty terrible record on diversity, so it’s always nice to see someone draw attention to the problem. However, I wish WIRED had used a different title for their article, because diversity isn’t an equality issue—it’s an equity issue.

I’m a telecommunications attorney. As a society that believes in equality, we believe that everyone should have the opportunity to become an attorney. Accordingly, that opportunity is available to anyone, regardless of their race, gender, or sexual orientation. Your chance to be a attorney is entirely based on merit! That’s equality!

I’m white, male, and heterosexual. This meant that I got to apply for a job in a market that gives preferential treatment to white men. To get a job as an attorney, I needed to have pretty good law school grades, which I got in part because I got more individualized attention than my non-white, non-male counterparts. I got into a good law school because I got into a good college, where again, I got called on more often and didn’t get interrupted, and my parents were able to help pay for my education because they weren’t on the wrong side of the racial wealth gap. I got into a good college because my parents’ being on the right side of the racial wealth gap ensured that I went to well-funded schools in a system that by design gives preferential treatment to white people, and I didn’t have to worry about being suspended or expelled because of my race or the fact that I wasn’t a native speaker of English.

So what’s my point?  Yes, I became an attorney based in part on merit—I had to get good grades and do good work. But I also went through a system where people like me were shown favoritism every step of the way. And while my story is about working in the legal field, you can find a whole bunch of folks in the tech field you will tell you stories just like mine. So it’s not enough to say “our merit-based hiring process treats everyone equally” and call it a day. If you do – despite having official “equality” in your hiring process — you end up with a tech industry that looks, well, a lot like our tech industry looks.*

Equity, however, looks back at all of the historical disadvantages faced by people of color, or women, or LGBT people, and asks the question, “How do we fix that?” One first good step is to make sure your company’s demographics roughly match the demographics of California, which a lot of tech companies have started to do. But that only creates equality in your company, not equity. To create equity, you have to undo the historical injustices I’ve been discussing by taking our current system and reinventing it to make sure that everyone has the same access to economic opportunities.

After all, isn’t fixing problems what the tech industry is all about?

*Another reason that the tech industry looks so homogeneous is that people have a (usually) unconscious bias toward hiring people that look like them, but that will have to wait for another post.

Oakland is closing the digital divide through Oak WiFi [...]