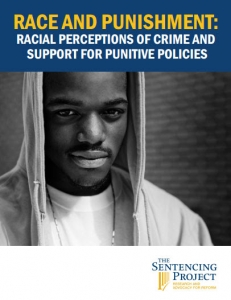 The Ferguson, Missouri police shooting of Michael Brown has led to much commentary about race and policing from all sorts of writers and advocates, including me.  A new report from The Sentencing Project adds important, unsettling information to the discussion. Researcher Nazgol Ghandnoosh, Ph.D., reviewed two decades worth of survey data and found some disturbing patterns.

It’s well known at this point that the U.S. has the world’s highest incarceration rate (take that, North Korea!), and that our jail and prison population is disproportionately African American and Latino. As I’ve mentioned before, Matt Taibbi’s brilliant new book, The Divide, chronicles in vivid, anger-inducing terms how our criminal justice system treats the poor and people of color far more harshly than wealthy (and mostly white) corporate execs who commit far more serious crimes.

But how did we get to this spectacularly dysfunctional state of affairs?

It may have something to do with the fact that whites, who still make up the majority of voters (and were a much larger majority when many of today’s harsh laws such as mandatory minimums were enacted) greatly overestimate how much crime is committed by blacks and Latinos. In one 2010 survey, whites were asked what percentage of burglaries, illegal drug sales and juvenile crimes are committed by blacks – and they overestimated by 20 to 30 percent. An earlier survey had found similarly large overestimates of both African American and Latino criminality.

Strikingly, not only do whites tend to be more supportive of harsh criminal penalties (like “3-strikes” laws, mandatory minimums and the death penalty) than other races, that support appears linked to these misperceptions of race and crime. Another 2010 survey “found that racialized views of youth crime and victimization – in particular, the belief that black youth commit a larger proportion of juvenile crime than whites, or that whites are more likely than blacks to be victims of violent crime – led whites, but not blacks, to support punitive juvenile justice policies.”

Can we please stop pretending that race is not a problem in this country?