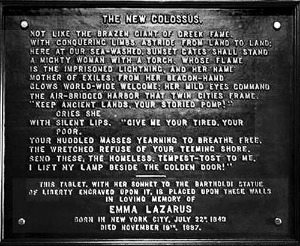 EDITOR’S NOTE: We haven’t had a lot of guest bloggers here at Greenlining, but the other day a letter popped into our inbox from none other than the Statue of Liberty herself. She asked if we could pass along her message to the American people, and it seemed like the least we could do. Here’s her letter:

We need to talk. I know it may seem strange that I’m finally speaking up after standing out there in the middle of New York Harbor since 1886, but I think I have the right. Seriously, you try standing out there in the sun, wind, rain and snow 24/7 for nearly 128 years without even a lunch break and see how you like the working conditions. I’ve kept my mouth shut – which, I admit, is pretty much what people expect from a statue – when I could have had plenty of legit complaints, so I think I’ve earned the right to say a few words.

You see, I’m starting to feel like I don’t belong.

Don’t get me wrong. I like it here, even if New York weather sucks a lot of the time and little kids keep throwing up on my observation deck. I can cope. But it’s starting to seem like I’m engaged in false advertising.

You may remember there’s a plaque they put inside my pedestal, with a poem by Emma Lazarus. People mostly quote the last few lines, but as a refresher, here’s the whole thing:

Not like the brazen giant of Greek fame,
With conquering limbs astride from land to land;
Here at our sea-washed, sunset gates shall stand
A mighty woman with a torch, whose flame
Is the imprisoned lightning, and her name
Mother of Exiles. From her beacon-hand
Glows world-wide welcome; her mild eyes command
The air-bridged harbor that twin cities frame.
“Keep ancient lands, your storied pomp!” cries she
With silent lips. “Give me your tired, your poor,
Your huddled masses yearning to breathe free,
The wretched refuse of your teeming shore.
Send these, the homeless, tempest-tost to me,
I lift my lamp beside the golden door!”

I’ve always liked that. Especially the “Mother of Exiles” part. It seemed like a pretty good description of this goofy country you folks are running here, which as far as I can tell was built pretty much from scratch by crazy dreamers who didn’t fit in wherever they came from (well, except for the people who were brought here in chains; we should talk about that). In fact, you guys didn’t have any real immigration restrictions at all till four years before I was dedicated, when you passed the Chinese Exclusion Act of 1882. And yeah, just from the name of that one I should’ve known that trouble was coming, but hey, I’m a statue. I’m not paid to do policy.

Well, things went downhill from there, but the last few weeks they’ve really gotten out of hand. Lately you’ve had a whole bunch of children coming up from Central America – kids fleeing violence and terror so bad that their families feel like they have no choice but to send them here alone to try to get a better life, or at least a life.

And what happens? A couple weeks ago, crowds of angry “Americans” (whose parents or grandparents, etc., were all immigrants – remember, I know this stuff) surrounded a bus full of children shouting, “Go home!”  The crowd even told one reporter, who happened to be Asian American, to “Go back to China!” and “go eat sushi!”

Sorry to be so blunt, but have you people lost your minds?

Even the more supposedly civilized folks – your pundits who speak wisely on TV and radio – have been spouting hysteria about how these kids are going to spread disease and terrorism. Even your president – a guy I keep hearing is some sort of liberal – seems to want to make it easier to deport these kids.

So we have a problem. These children are pretty much the epitome of “the homeless, tempest-tost to me.” They’re the people I was put here to welcome. And you’ve left me standing out here with my lamp and my inscription looking like some sort of con artist while you folks look for ways to chase them back to whatever fate awaits them in their home countries.

Seriously not cool, guys. Do you think maybe you could ask France if they’d like me back?