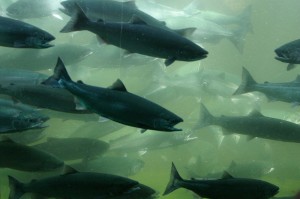 I recently spent a few days sightseeing in Seattle, and wandered by the Hiram M. Chittenden Locks, a canal-like structure that connects Puget Sound with Lake Union and Lake Washington, enabling boats to navigate the change in elevation between the bodies of water. There, I witnessed an affirmative action program for salmon.

You see the locks, like many dams and other man-made structures in waterways used by salmon, create a barrier that prevents the mature salmon from returning to their fresh-water home to spawn. And if they can’t get home, they don’t reproduce, meaning the end of the local salmon population.

So the humans who built the locks have created an ingenious device called a fish ladder , which enables the salmon to get around the man-made barrier and get where they need to go in a series of manageable steps. Thus, the people get to move their boats from the lakes to Puget Sound or vice versa, and the salmon get to reproduce – which ultimately also benefits the people, who do, after all, like eating salmon (if you’re in the area, by all means try the salmon and chips at Ivar’s). Such structures have been put in place in numerous waterways.

I actually found it oddly moving that humans have gone to such trouble to help these fish move upstream – and it really was a lot of trouble, because the ladder has to not only be navigable for the salmon, but it must be set up in such a way that they will find it and be attracted to it.

To the best of my knowledge, nothing about this is controversial. But if this were for people instead of fish, it would be – and is – quite a different story. Can’t you just hear the politicians bellowing? “Why do these fish need special preferences? There are hundreds of species who live by that waterway – plants, birds, other fish, insects – and none of them get any special treatment! This fish ladder is discriminatory!”

And yet that silly response is exactly how many Americans, including the U.S. Supreme Court, react when, through  programs sometimes called affirmative action, this country attempts to remedy the artificial barriers that continue to make it hard for some of our neighbors to fulfill their human potential,. Go figure.