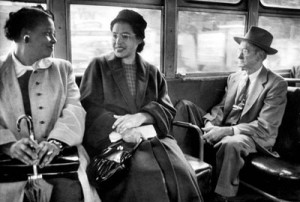 A little over a week ago I heard a story on NPR about recent developments regarding same-sex marriage. Someone – I don’t remember who – referred to marriage equality as “the civil rights movement of the 21st century.” That’s not a new phrase – it’s been in use for at least several years.

Before anyone jumps to the conclusion that this is the whining of some disgruntled homophobe, let me note for the record that I’m gay and have been involved in LGBT civil rights since 1978. For what it’s worth, I’m also white, as you may have noticed from my photo.

So yes, I support marriage equality (as does Greenlining). But calling same-sex marriage “the civil rights movement of the 21st century” suggests that other civil rights movements are done and over with – that discrimination and inequity based on race, ethnicity, gender, religion, etc. are just unhappy memories. Or that the yawning racial wealth gap means nothing, as does the fact that women still don’t get equal pay for equal work. Or that the wildly disparate impact of the criminal justice system (blacks, for example, use illicit drugs at the same or lower rates than whites, but are far more likely to be arrested on drug charges) is just coincidence.

Those things are not coincidence. The details change over time, but the sad facts of prejudice and unequal treatment remain.

Embedded in a phrase like “the civil rights movement of the 21st century” is the implicit notion that civil rights movements happen one at a time. They don’t. Women were agitating for the right to vote at the same time the U.S. was grappling with slavery. The first modern gay civil rights organization, the Mattachine Society, was being formed in Harry Hay’s living room just after Jackie Robinson broke major league baseball’s color barrier. Multiple civil rights movements have always existed together, often reinforcing one another. They still do, and should.

So to my LGBT brothers and sisters and our straight allies: Please, let’s show a little respect for others still struggling for equality and fairness. Let’s not pretend that because our struggle is in the spotlight, other struggles are finished. We’re all in the march toward equality together, and we’d do well to keep that in mind.