California’s cap-and-trade system became a reality Wednesday with the state’s first auction of carbon permits. Thanks to legislation signed in September by Gov. Jerry Brown, this event brings a real promise of help for our state’s most polluted and economically struggling communities.

The story begins in 2006, when lawmakers passed AB32, the Global Warming Solutions Act, which requires California to reduce its greenhouse gas emissions to 1990 levels by 2020. To achieve this, the California Air Resources Board established a cap-and-trade program, which caps the amount of air pollution that a power plant or industrial polluter can produce, and requires these facilities to purchase credits to exceed the pollution cap. This program is projected to bring in $1 billion in state revenue in the first year.

In a state that is struggling economically and where too many of our citizens still breathe dirty air, where the money goes matters.

That’s why a broad coalition – business associations, public health organizations, labor, transportation and environmental groups, ethnic and immigrant organizations, economic-justice, housing and faith-based organizations – came together behind a simple idea to put a meaningful chunk of the money from the carbon auction into low-income communities that typically are hit first and worst by pollution.

In essence, AB1532 guides how the carbon auction funds will flow, and SB535 determines where a portion of the funds will go.

Pérez’s bill creates a public process that structures how the money should be allocated, with parameters on what green sectors to invest in and guidance on the distribution process, ensuring fairness and transparency. De León’s bill ensures that at least 25 percent of cap-and-trade funds benefit “disadvantaged communities,” with at least 10 percent invested directly in those areas.

Officials will identify disadvantaged communities based on geographic, socioeconomic, public health and environmental criteria. These will include factors such as heavy pollution problems and large numbers of people with low incomes, high unemployment rates and low levels of home ownership or educational attainment.

These laws are good for our state in two ways. First, they will attract additional clean energy investments to California by providing transparency, longevity and certainty in California’s climate policy. Venture capital for clean energy has been flowing into California in record amounts since AB32 was signed. This will help maintain that momentum.

Second, the laws will make sure that a significant portion of the money will go to communities that most urgently need clean air and good jobs. Investment in these areas will improve California’s economy, support local businesses, create good-paying jobs and help millions of Californians toward a better life. 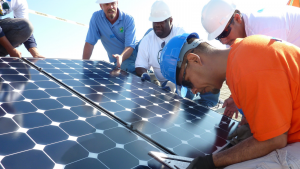