Source: LA Watts Times | Written by: KELLIE MIDDLETON, M.P.H. and LEN CHANTY
Slow and steady wins the race… If Aesop’s moral holds true, then the race for black equality and social justice, which started nearly 40 years ago, should be nearing its end by now. But it’s not. In the 1960s, a great leader, whose birthday we celebrate today, started a successful movement to mobilize those treated unjustly on the basis of skin color. If Dr. King were alive today, he would realize that the civil rights race is far from being complete. The race for civil rights has shifted from the traditional and obvious discrimination against blacks to something more institutional but just as detrimental and unjust.

Dr. King did not speak too much on health care in America. However, he did remark that “of all the forms of inequality, injustice in health care is the most shocking and inhumane.” The language of health inequality and disparities introduced by Dr. David Satcher, 16th U.S. Surgeon General, did not exist until recently. Why not? At the time, blacks did not have the right to eat at a public restaurant that served whites, let alone, equal access to health care services. Hence, the perpetuation of health disparities has evolved into the civil rights issue of the 21st century.

• The life expectancy of A f r i c a n Americans is as much as six years less than that of Caucasian Americans.

• The highest prevalence of cardiovascular disease among all racial and ethnic groups is within the African American population. Furthermore, research shows that blacks are one-third less likely to have coronary bypass surgery than whites with the same condition.

• Cancers among blacks are more frequently diagnosed after the cancer has metastasized and spread to regional or distant sites, which contributes to African Americans having the highest death rate from colon and rectal cancer of any racial or ethnic group in the U.S. [1].

• Of all racial and ethnic groups in the U.S., HIV/AIDS has hit African Americans the hardest. Though blacks account for about 13 percent of the U.S. population, they account for about half of those who contract HIV/AIDS.

A closer look at the discrepancies reveals that blacks are not dying of unfamiliar, incurable illnesses nor of genetic diseases specifically targeting them, but rather from common diseases that are more often prevented and treated among whites than among blacks.

Prevention, early detection, and quality treatment for all Americans should be explicitly addressed as priorities; however, disparities in acute and chronic disease conditions persist due to the provision of less than adequate health care and uninsurance in minority communities. African Americans are less likely than whites to receive diagnostic procedures, treatment, and therapy for heart disease.[2] More than five times as many black children as white children die from asthma, though more than four times as many black children as white are hospitalized for the disease.[3] Minorities make up nearly one-third of the total U.S. population, yet well over half of this country’s uninsured population. In California, 75 percent of the state’s 6.5 million uninsured belong to a minority population.

Regardless of whether African Americans have health coverage, disparities still exist. For example, last year, a 12-year-old African American boy from Maryland died due to an infection in his tooth that spread to his brain. His death could have been prevented if one area dentist agreed to accept the family’s Medicaid coverage. Even under the same insurance, blacks have less access to primary care physicians, specialists, and hospitals. In essence, African Americans are receiving an inequitable standard of care.

If Dr. King were alive today, he would be more than disappointed at the “broken” health care system which Gov. Schwarzenegger strongly believes needs to be repaired. Why after decades of fighting for justice and civil rights are people of color being treated differently in a health care setting?

There are no significant, acceptable reasons for health inequalities. The primary basis results from sophisticated forms of discrimination, inadvertent bias in health care delivery, and environmental factors that could be readily overcome. Health disparities are of severe importance given that Americans are dying as a result. The civil rights issue that Dr. King sacrificed his life for is not just an African American issue, but a concern for all Americans as Gov. Schwarzenegger has recently demonstrated. We should all be concerned with equity in health.

Hopefully, Aesop’s fable will ring true for Black America. It has mastered the slow and steady advancement towards civil rights. Now, it is time to win the race.

Kellie Middleton is the current Health Policy Fellow at the Greenlining Institute in Berkeley, Calif. Greenlining is a multi-ethnic public policy, research, and advocacy organization whose ultimate goal is to empower communities of color. Middleton focuses on diversity in the health workforce, diversity in California medical schools, and health care reform. She earned her Bachelor of Science double majoring in biology and psychology from the University of Notre Dame and her Masters of Public Health concentrating in Health Policy and Administration from the University of Georgia. In Georgia, she focused on health policy specifically involving telemedicine, and cardiovascular disease prevention and treatment in African American Communities. She will continue her health policy career and education at the University of Pittsburgh School of Medicine, where she will enroll Fall 2008. 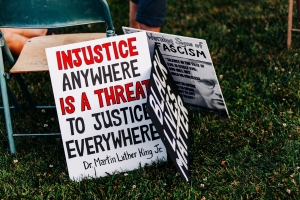