President Donald Trump announced what he called a top to bottom overhaul of the regulations that govern one of the nation’s most significant environmental laws. Trump said he wants to speed up approval for major projects like pipelines and highways. The NAACP and others said the move could sideline the concerns of poor and minority communities impacted by those projects and discount their impact on climate change.

A report from the NAACP, Clean Air Task Force, and the National Medical Association found that Black Americans are 75 percent more likely to live in “fence-line communities” that border oil and gas refineries. Officials Climate Power 2020 said that worsens when communities are robbed of the right to protest pipelines, refineries, or chemical plants displacing their homes.

“Not only will Trump’s attack be a big win for oil and gas CEOs, but it will silence communities of color, who are most impacted by toxic pollution and have historically been ignored in favor of major polluting projects,” Climate Power 2020 officials noted in a news release.

“Removing these protections is just the latest example of Trump’s corrupt attacks on communities of color in the United States. Black and Brown America are suffering under the weight of Trump’s incompetence on health care, discriminatory housing policies, police brutality, and climate injustice,” the statement continued.

“Eliminating environmental reviews is just the latest, devastating, example of Trump prioritizing the wants of Big Oil over the right to clean air and clean water for Americans of color”

Climate Power 2020, a campaign dedicated to changing the politics of climate in 2020, has highlighted many incidents of what they said are Trump’s environmental assaults on communities of color. They said the president advanced a rule that would stop communities of color from having any say on federal projects that would bring pollution and chemicals to their neighborhoods Further, Trump gave his “chemical cronies and open license to pollute in Black and Brown towns,” using the COVID-19 pandemic as cover to waive environmental rules that directly connect to air quality and respiratory health, Climate Power 2020 officials stated.

In Houston’s most heavily industrialized areas, air pollutants surged as much as 62 percent after Trump’s rollback, according to a Texas A&M analysis of air monitoring stations. Scientists have warned that soot pollution disproportionately affects communities of color and can cause cancer, heart disease, and asthma, killing Black children at ten times the rate as white children. Soot in the air was linked to higher death rates from COVID-19 around the same time that Black Americans were dying at three times the rate as whites from the disease, Climate Power 2020 officials noted. Still, Trump overruled calls from scientists to set tighter air quality standards on soot pollution after disbanding the scientists advising him on the issue.

Environmental activists also noted that Trump’s fight with California is killing people of color in that car exhaust counts as another significant source of the soot pollution that kills Black and Brown people. One study found that communities of color in the Northeast and Mid-Atlantic breathe 66% more air pollution just from car exhaust than white residents – exposure made worse when Trump insisted on rolling back clean cars standards.

“It’s well-documented that communities of color often live with the worst pollution problems, often as a lingering result of being redlined into neighborhoods near industrial facilities and other sources of toxic pollution, and there’s good reason to think this is making the impact of COVID-19 worse,” said Bruce Mirken of The Greenlining Institute.

“These communities need more control over their future and the environment they live in, not less,” Mirken demanded.

A Quick Look at the Biden-Harris Clean Energy Plan, [...] 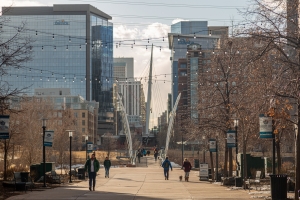 A Community of Practice for Equitable Electric Mobility