BERKELEY, CALIFORNIA – Despite a congressional mandate to pay more attention to diversity within federal financial regulatory agencies, a new report from The Greenlining Institute finds that these agencies generally lack diversity at executive and upper management levels and often lack the systems needed to track progress.

The report, Government That Looks Like America: Diversity in the Financial Regulatory Agencies, is set for public release July 6. Journalists can preview it now at the link above.

“During the bubble that led to the 2008 crash, financial regulators simply missed what was going on in communities of color,” said report co-author Danielle Beavers, Greenlining’s director of diversity and inclusion. “If the people at decision-making levels look like America, they will do better at making sure this critical industry works for all Americans.”

After the financial crisis devastated communities of color, and recognizing that these communities constitute the proverbial “canary in the coal mine,” Congress ordered placement of Offices of Minority and Women Inclusion in major financial regulatory agencies, with the goal of promoting diversity in both the financial industry and within the regulatory agencies themselves. Greenlining examined 2014 data from eight agencies that oversee banking and financial businesses. Key findings include:

“In a country where people of color will soon be the majority, we’ve seen what happens when financial regulators live in a bubble,” said Greenlining Institute President Orson Aguilar. “We applaud these agencies for sharing their data with us, and now we need them to use this information to make real change.” 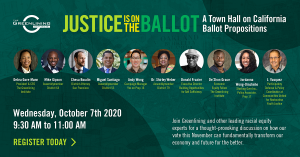