Next Tuesday, Los Angeles will take to the polls to confront one of its enduring stereotypes.

Los Angeles, critics say, is a civic wasteland, a sprawling city still struggling to forge an identity for itself. Look no further than the last mayoral election, they might say. Only 20.8% of voters turned out for the Los Angeles mayoral primary election in March 2013, causing consternation from many commentators.

Two years after that dismal showing, Los Angeles voters must decide if changing the timing of city elections will provide the remedy to the civic problems that ail the city. Many of the city’s elected officials and pundits have forsworn the usual political palaver about the need for voter participation in favor of an initiative that hopes to create more robust voting in Los Angeles.

Charter Amendments 1 and 2 would involve not just elections for the Los Angeles City Council and mayor, but also ballot measures, other city offices, and elections for members of the board of the Los Angeles Unified School District. The proposed changes to the city charter spring from a report from the Municipal Elections Reform Commission, a committee created by the city council last year to address the flagging rates of voter turnout in recent city elections.

All across the country, cratering levels of voting turnout have prompted widespread discussion about the role of citizen participation in democracy and ways to encourage more voters to return to the ballot box. But in recent years, Los Angeles stands out as a particularly stark example of diminishing voter turnout, lagging behind both California and the nation in terms of registered voters and voters casting ballots.

A supporter of the proposed changes to city elections, former Municipal Elections Reform Commission Chair Fernando Guerra says that low voter turnout in Los Angeles can in part be explained by a perfect storm of factors.

“To me, there’s a very rational reason why there’s very low voter turnout,” said Guerra, director of the Leavey Center for the Study of Los Angeles at Loyola Marymount University. “This is a one-party city, so there is no partisan competition. There are no wedge issues in L.A. like there are at the national level with gay marriage, abortion, the role of government, and climate change, for example. And there is no longer significant racial inclusion. Latinos and Asian are somewhat under-represented but not excluded.”

Voters in Los Angeles are simply weary when city election time rolls around, according to Dan Schnur, director of the Jesse M. Unruh Institute of Politics at U.S.C. and a co-chair of the pro-labor, pro-business Citizens for Increased Voter Participation committee that is spearheading support for amendments.

“One of the major reasons that voter turnout in Los Angeles has been abysmally low for many years is voter fatigue,” Schnur said. “After Angelenos turn out to vote for governor or president, they’re simply not ready to start thinking about [city] campaign politics again just a few months later.”

That’s why Schnur and Guerra believe that consolidating elections will help boost turnout more than trying to convince voters about the importance of municipal elections in odd-numbered years, a legacy of the century-old Progressive Era. Guerra points to the work of Zoltan Hajnal and others who say that the timing of municipal elections may explain some of the voter turnout deficit in California. And other California cities with elections in even-numbered years enjoy broader and better participation than those in odd years, according to a recent report from the Greenlining Institute.

But opponents of the amendments to the City Charter believe the proposed changes to city charter would give away local control of elections and discourage independent candidates. In a recent editorial, former Los Angeles city clerk Michael Carey suggests that Los Angeles is not alone in dealing with both dismal voter turnout and off-year elections. Both Seattle and New York employ stand-alone city and school board elections, but neither has been compelled to change the election process in search of more participation.

More importantly, Carey and others involved in the Save Our City Elections coalition believe that moving the date of city elections would unleash several unintended consequences, including forcing city issues to take a backseat to more prominent and better-funded federal and state races. And the amendments might mean an influx of money into city races, making it much harder for candidates for city positions to escape the influence of moneyed special interests.

“That’s not consolidation,” Carey wrote in the Daily News. “That’s capitulation to the grip of big money in our politics. Large donors from labor and business would be able get their way in one step.”

But Schnur says the city’s political system is already awash in money. For example, Wendy Gruel, despite a tidy war chest of money from the union for Department of Water and Power employees and others, could not defeat Eric Garcetti in the 2013 mayoral election.

“Money already dominates the process,” Schnur said. “The one antidote to that is voter participation. The primary rationale [with the amendments] is making it easier for voters to become involved in the process.”

Concerns about city issues becoming lost in the election process doesn’t give voters or candidates enough credit, according to Schnur.

“Smart local candidates and smart local advocates will learn how to make their community issues a part of the state-wide conversation,” he said. “Because voters are already paying attention to those larger-scale races local issues have the opportunity to get a much-greater hearing, not less.”

But that type of thinking doesn’t truck with Los Angeles City Councilman Bernard Parks, who was the only city councilmember to vote against a proposal to place the amendments on the ballot back in October. He says the proposed voting amendments are a “smokescreen” that masks a power grab by incumbents at City Hall. Shifting to a new voting schedule would provide some councilmembers with up to 18 additional months on the job past the usual 12-year term limits.

As some in California debate the effectiveness of the recently implemented top-two primary system, Parks says that more study needs to happen before the city makes a drastic change to its elections.

“Rather than creating a gimmick on top of gimmick, we should be finding out why people aren’t voting in Los Angeles,” he said. “Local issues and community concerns are going to get drowned out.”

Parks also points out that a change to the timing of the city election process could prevent other approaches, like making election day a holiday or moving the date to a Sunday. And switching to elections in even-numbered years would involve a commitment to paying money to the office of Los Angeles County Registrar-Recorder.

“The actual cost is unknown,” Parks said. “If you’ve spent any amount time here, you know the county doesn’t do anything for free.”

Next Tuesday, it will be up to the city’s much-maligned voters to decide the future of city elections. Advocates on both sides of the issue are counting on Los Angeles voters to cast off their indifferent civic reputation and show up to what is still the most important position in democracy: the voting booth. 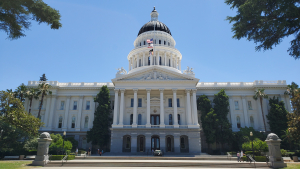 California Needs a State CRA for a More Fair, [...]