The New Year is well underway, and we are excited about our accomplishments in 2014 and looking forward to another groundbreaking year.

2014 showed us again and again the continuing importance of race in a country that likes to imagine itself “color-blind,” but which still imprisons a higher percentage of its black citizens than did apartheid South Africa. Just to speak the names of Eric Garner, Michael Brown, Trayvon Martin and Tamir Rice says more about pain and injustice than we should ever need to say.

Issues of race and diversity came bubbling up in unexpected places, from the NBA to Silicon Valley, where the lack of diversity in the booming tech world finally began to get the attention it’s long deserved.

On the economic front, we hear more and more about economic recovery – but recovery for whom?

Although unemployment is apparently lower today, job growth has been fueled in part by some workers trading good-paying jobs lost during the recession for lower-paying positions. The typical American family makes less than the typical family did 15 years ago, a statement that hadn’t previously been true since the Great Depression.

And the racial wealth gap continues. For every dollar of wealth a white family has, the median Asian family has about 81 cents (a figure that masks pockets of real poverty within some Asian communities), the median Latino family has 7 cents and the median black family has less than 6 cents.

We have much unfinished business to tackle in 2015, but already the media have started leaping ahead to the 2016 election. Based on the coverage, I could rattle off names of a dozen potential presidential candidates and their poll numbers, but barely a single plan for closing the racial wealth gap.

From Washington, there’s good news and bad news. The wave of publicized police shootings of young men of color seemed to spur the Obama administration to pay a bit more attention to racial inequities, and the president finally took long-awaited positive action on immigration. In addition, we see a President and FCC willing to do more the close the persistent digital divide in our country. On the other hand, we have a new Congress that seems determined to undo what progress has been made in recent years, such as dismantling Obamacare and weakening the Consumer Financial Protection Bureau.

That’s why the progress we make in California continues to be more important than ever. California continues to lead the way in implementation of the Affordable Care Act even as we prod Covered California to do better, set new standards for supplier diversity that brings jobs and opportunity to communities of color – with a friendly shove from our annual Supplier Diversity Report Card – and pioneer enlightened clean energy policies that simultaneously fight climate change and uplift our communities with jobs and investment.  We also recently witnessed one of our very own Academy alumni members, The Honorable Leondra Kruger, get appointed to the California Supreme Court.

It’s never been more important to keep building “Greenlining” models that demonstrate to the nation that racial equity is good for everyone, and that redlining hurts us all. We look forward to working with you to build a nation where race is never a barrier to economic opportunity and communities of color thrive.

P.S. Application deadlines for our Leadership Academy programs are approaching. RSVP for an informational session near you to learn more. 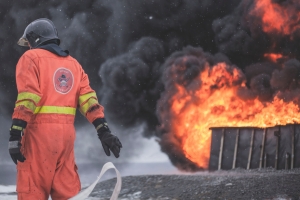 Marathon Refinery Explosion: My Community Was Literally on Fire