To determine who is eligible for admission into the United States, U.S. Citizenship and Immigration Services (USCIS) uses “public charge” to refer to an individual who is likely to become primarily dependent on the government for support.  The current rule defines public benefits as cash assistance programs, including Temporary Assistance for Needy Families (TANF), and Supplemental Security Income (SSI), as well as long-term institutional care paid by the government. 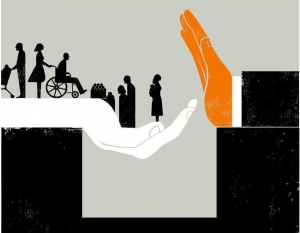 On October 10, 2018, the Trump administration proposed a new rule that would completely change how USCIS defines a “public charge.” In an attempt to reduce the number of immigrants entering the United States and limit those who are applying to change their status, the proposed rule sought to expand the types of services considered to be public benefits to include the Supplemental Nutrition Assistance Program (SNAP), Medicaid (called Medi-Cal in California), the Medicare Part D Low-Income Subsidy Program, and several housing programs.

In response, over 200,000 public comments – nearly four to one in opposition to the controversial proposal – flooded the Department of Homeland Security. Opposition to the proposed public charge rule was so strong that by the time the public comment period closed on December 10, 2018, the online portal of the federal register temporarily shut down.

I led The Greenlining Institute’s efforts to submit public comments on this ruling and organized my colleagues to submit comments of their own. We strongly oppose the proposal because it paints families of color as undeserving of having their basic needs met when they apply for the same government assistance that many low- to moderate-income white families receive.

As a daughter of Afro-Caribbean immigrants and an advocate for communities of color, this issue is deeply personal. My story would not be possible had this proposal been in effect when my mother immigrated to Brooklyn, New York from The Republic of Trinidad and Tobago. My mother and her younger sister migrated to Brooklyn with two education visas and little money. Public benefits like Medicaid helped my mother receive necessary medical care while juggling a challenging graduate program in social work.

The professional skills she acquired during that process prepared her to successfully apply for U.S. citizenship later on. Access to essential health and nutrition through public benefits provided a necessary stepping stool for my mother in her early stages of building her professional career. Today, my mother is a senior-level director of social work in New York City. My mother’s success reflects the determination that immigrants across the world bring to the United States. Caribbean and African immigrants like my mother fuel the New York state economy as well as the vibrant social and cultural life of the city.

Nationwide over 19 million or one in four children live in a family with an immigrant parent, and nearly nine in ten of these children are citizens. Black families with at least one immigrant member make up over 9.1 million of the total Black families in the nation. There is no way to target individual immigrants without harming children, families, and communities. Even though it’s just a proposal and hasn’t taken effect, the proposed rule has already created a chilling effect amongst some immigrant families who are deciding to forgo participation in essential health and nutrition services in fear of government repercussions. This means people literally go without food or medical care for fear it will hurt their chances of becoming a citizen. If passed, the public charge rule will undermine the health and well-being of the United States.

While my family no longer relies on the ‘stepping stool’ of public benefits, I will always remember the story of how critical that extra help was during my mother’s early years in the U.S. I would not have the passion to advocate for communities of color without the support of my mother and the essential health services that propelled her.


The Department of Homeland Security (DHS) is legally required to review every single unique comment submitted before publishing a final rule. Due to the magnanimous amount of comments submitted, we are unsure of when a final rule will be made. The proposed public charge rule will not be retroactive if it becomes final. It will not punish past use of newly included public benefits programs if they were used before the final rule goes into effect.

If and when a final rule is published, there will be at least 60 days before it takes effect.  If the proposed rule goes into effect, families will have this 60-day period to dis-enroll from a program, if they determine that it is necessary for their immigration case. We recommend following the Protecting Immigrant Families Coalition site to keep up to date on the status of this proposed rule.