A loophole in California Financing Law lets predatory lenders charge virtually any interest rate for loans over $2,500, which is disproportionately harming the financial stability of  low-income families of color. Assembly Bill 539, The Fair Access to Credit Act would keep already vulnerable communities from falling further into a cycle of poverty by capping interest rates.

The average annual percentage rate in 2015 for payday loans in California was 366 percent. That, to put it bluntly, is a rip-off, but we can fix it this year: Assembly Bill 539—“The Fair Access to Credit Act” -- would impose a 36 percent annual simple interest rate cap on authorized financial lenders under the California Financing Law for loans between $2,500 - $10,000.

Too often, people living in California’s low-income neighborhoods have no savings, little or no credit history, no access to a bank branch, and limited financial education. That makes them a perfect target for predatory lenders, who fill the gap in financing for individuals that have been kept out of the mainstream financial system by decades of redlining and discriminatory policymaking.

Predatory lenders market payday loans and other dubious forms of lending as quick and easy solutions in a financial emergency: An individual needs to borrow $2,500 to finance a vehicle repair and is pressured to sign a promissory note that tells them they’ll pay a finance charge of 20 percent when they repay the loan in two weeks. It’s quick and easy: No check of credit history, income, etc., and the borrower is out the door in minutes without understanding the loan terms or knowing how they’ll repay the loan. A few missed payments on a $2,500 loan can often result in an annual percentage rate of more than 100 percent, more than tripling the cost of the loan.

The California Department of Business Oversight conducted a study using 2014 U.S. Census data and found that payday lenders are highly concentrated in Black and Latinx neighborhoods. Black and Latinx communities are disproportionately unbanked and underbanked as a result of living in bank deserts. And in Mehresa Baradaran’s The Color of Money, she emphasizes that Black borrowers are “more than twice as likely as any other race to use payday loans.”

In my hometown of San Diego, where I served as a loan officer for a Community Development Financial Institution, I was more likely to walk past a payday lender than a bank branch in the majority immigrant and minority community where I lived. Individuals were forced to come to us for personal and small business loans because they couldn’t access mainstream financing at all—not just in the event of an emergency. Some found us before they succumbed to predatory lenders. Many more were less fortunate and I worked with them to repair credit histories riddled with defaults on subprime loans from predatory lenders due to exorbitant fees and increased interest rates that made repaying their loans impossible. 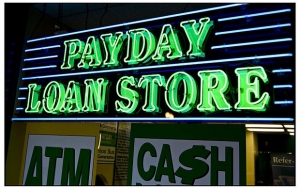 Communities of color don’t just fall prey to predatory lenders because they’re in our neighborhoods and more accessible to us than banks. Communities of color have less savings and assets: For every dollar of wealth a White family has, the median Black family has less than a dime, giving them less protection against financial emergencies. Greenlining envisions a future where low-income communities of color can harness an equitable economy towards closing the racial wealth gap.

While low-income communities of color need access to credit to thrive, the exorbitant and unregulated interest rates predatory lenders charge perpetuate a cycle of poverty and debt that can thrust a family into economic despair.

Payday loans are not a viable alternative to mainstream financial institutions for accessing credit and building wealth.  Assembly Bill 539 would keep already vulnerable communities from falling further into a cycle of poverty by capping interest rates. AB 539 gives California the opportunity to join 38 other states in protecting consumers from high interest rates and giving communities a fair chance to access credit and build a secure, financial future.

Assembly Bill 539 is one part of the solution to opening up financial opportunity to communities that have been existing financially on the margins. With a Consumer Financial Protection Bureau in Washington, DC that continues to roll back federal protections for consumers, California must lead the way in working to #stopthedebttrap. Write to your legislators to express your support of AB 539 and thank Assemblymembers Monique Limón, Tim Grayson and Lorena Gonzalez for introducing this bill and working to protect California’s most vulnerable consumers.