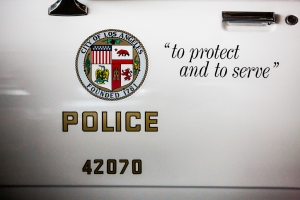 From time to time I’ve written here about my experiences of White privilege – sometimes to incredulous responses from White readers who steadfastly refuse to believe that White privilege exists. Well, it does, and I saw it again during a recent vacation in Utah, when a highway mishap caused me to need help from the police.

Though police shootings of unarmed, young,  Black men don’t get the headlines they did a couple years ago, they keep happening – as the family of Antwon Rose knows far too well. White folks like me simply don’t live in the same world when it comes to encounters with police officers, as my recent experience reminded me.

I was driving up Interstate 15, heading back to my hotel after a day of hiking in beautiful (but unspeakably hot) Zion National Park when, out of nowhere, a massive semi truck sideswiped me.  I was able to get out of its way before the encounter became deadly, but the repairs to my car will cost something north of $3,000. After hitting me, the truck kept on going, ignoring my frantic honking. I pulled out my phone and managed to snap a couple photos of the hit-and-run trucker, but that was all I could do.

Needing gas, I pulled off at the next gas station to fill up and try to calm down. Happily, a Utah Highway Patrol car pulled in at the same moment. Without hesitation, I walked up to the officer and explained what had just happened. I should probably mention that – after a day of hiking in 100-degree heat and a near-death experience minutes before – I was tired, sweaty, disheveled, and generally disreputable-looking.

The officer was unfailingly polite and helpful. After looking at my photos of the hit-and-run trucker, he radioed ahead to colleagues down the road, who found the truck and pulled it over.  The officers got all the information, wrote up a report, and were consistently respectful to both me and the truck driver, who turned out to be a White woman.

None of this should be remarkable. And for White people, it’s not. That’s where white privilege comes in.

Black parents almost universally feel the need to have a discussion with their children about police that’s become known as “The Talk.”  Details will vary, but it typically includes things like: “Don’t go out with friends all wearing the same colors because you’ll be assumed to be gang members. If you must interact with police, keep your hands visible at all times. Use your Sunday school manners and don’t talk back. Make no sudden movements. Don’t give them an excuse to kill you.”

In fairness, as a White kid in the suburbs, I got a talk from my dad about the police as well. I remember it well enough to give it to you nearly word-for-word:

“If you’re ever lost or need help, look for a police officer. The police are your friends.”

Until every child of every race or ethnicity can get that version of The Talk from their parents, we need to grapple with the reality of White privilege and its deadly consequences.