By Jimmy O’Dea and Joel Espino

Next month, LA Metro, the second largest transit fleet in the United States, will decide what types of buses to purchase through 2030. The decision will impact Los Angeles’ efforts to have clean air, fight climate change, and expand economic opportunity. We applaud the proposal put forward by Metro staff last week to transition the entire fleet to zero-emission vehicles.

LA Metro can be a leader

Today, Metro’s 2,200 buses operate entirely on natural gas. While natural gas was a better option than diesel when Metro began switching fuels more than 20 years ago, it no longer deserves the “clean” branding seen on Metro’s buses. Advances in technology have made electric buses an even cleaner and viable option. It’s time for Metro to continue its leadership in fighting pollution and transition to the cleanest technology available today: electric buses powered by renewable energy. 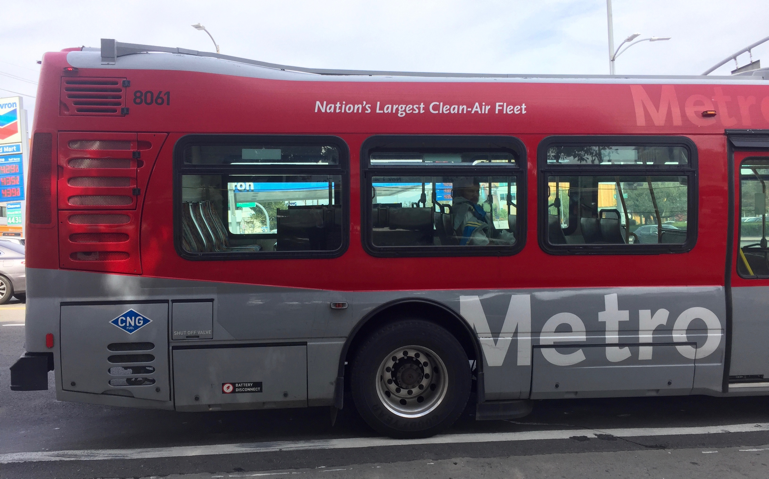 Earlier this year, a coalition of bus riders, labor groups, and public health groups launched a campaign urging Metro to be a leader and transition to an all-electric bus fleet powered by renewable energy. A central part of this campaign is that communities most affected by poverty and pollution should be first to reap the benefits of bus electrification, such as improved air quality and more high-quality, skilled jobs. Mayor Garcetti recently urged Metro to make this transition by 2030 and just yesterday, the Los Angeles Times expressed its support for Metro’s path to zero-emission buses.

Despite years of work and improvement, Los Angeles’ air still ranks among the worst in the country. Heavy-duty vehicles like buses are a major source of air pollution.  Today, residents of communities like Wilmington or Bell Gardens, who live near highly trafficked roads and freight corridors, suffer the consequences of air pollution like increased risks of lung and heart disease and premature death.

Our analysis found the potential for good jobs in manufacturing of electric buses, construction of charging infrastructure, and maintenance. With the right training and hiring practices, this industry could bring an economic boost to communities most in need.

Electric buses are the cleanest

The technology is here and ready

Electric buses fueled with hydrogen have had ranges over 200 miles for many years and battery electric buses recently passed this mark. With fewer moving parts and durable electric motors, maintenance costs are lower for electric buses. Electric buses can also accelerate and climb hills as well or better than diesel or natural gas buses.

Metro’s bus investment would boost the regional economy, including at least eight electric bus and truck manufacturers in the LA region, and spur job training in underserved communities, creating a workforce capable of accelerating electrification in other areas of transportation.

Metro can’t switch to electric buses overnight, but as it retires natural gas buses it should replace each with a clean, quiet electric bus. Nearly 20 transit agencies across the state have stepped up to the plate and begun incorporating electric buses into their fleets, many with significant, if not full, commitments to zero-emission buses. California and its poorest and most polluted communities depend on it.

This blog post originally appeared as a joint op-ed at laopinion.com.

Jimmy O’Dea is a Vehicles Analyst in the Clean Vehicles Program at the Union of Concerned Scientists. Follow him on Twitter.