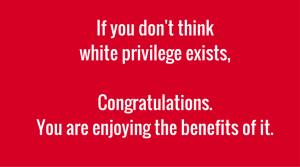 Lots of white folks have trouble understanding the concept of white privilege. They don’t feel particularly privileged, and its operation is pretty much invisible to most whites. So a while back I wrote a blog post to try to explain it, “A Case Study in White Privilege,” using my own experiences to show, step by step, how being white gave me advantages that were much less available to people of color.

I never thought I would singlehandedly bring enlightenment to white America, but some of the reactions when I shared the piece on social media did make my head spin.

The resistance didn’t all come from right-wingers. One Twitter user insisted that white privilege was just a way to avoid talking about class, since as a capitalist (!) I wouldn’t want to talk about class. When I brought up redlining, this person said, “Redlining is a subset of class. Remove class and you have removed redlining.”

In fact, redlining – and housing discrimination more broadly – had and have everything to do with race and nothing to do with class. The FHA’s 1934 underwriting manual, for example, specifically warned against “threatening or possible infiltration of inharmonious racial groups.”

In the early 1960s, basketball  great Wilt Chamberlain – then with the San Francisco Warriors and dominating the NBA as only a handful of players have ever done — couldn’t buy a home in some parts of San Francisco because of his skin color. Again, this had nothing to do with class – then as now, top athletes were paid far better than most of us – and everything to do with race.

Another complainant, this time seemingly from the political right, told me that I was just wallowing in “white guy guilt” and wanted to “punish [white] people” for wrongs committed 50 years ago. He said this despite my having expressed no desire to punish anyone and making it as clear as I could that I thought my family had earned everything they had: I simply wanted to note for the record that my parents’ race allowed doors to open for them and their kids that typically did not open for others, especially African Americans.

But in that prior post I did, perhaps, dwell too much on the lingering effects of past discrimination – even though those effects still cause damage. Others have rightly noted how white privilege played out in the recent Rio Olympics, so let me offer a couple current examples from somewhere more dangerous, our criminal justice system.

Again and again we see evidence that “driving while black” is a real phenomenon – that African American drivers are more likely to be pulled over for minor infractions and more likely to be searched after being pulled over. The latest such report, from Oakland, California, found that black motorists were far more likely than whites to be searched, even though those searches found a higher percentage of whites actually possessing contraband. And as Sen. Tim Scott (R-NC) explained recently, even being a U.S. Senator doesn’t protect you from police making the assumption that a black male driving a nice car must have stolen it.

In debates over racial disparities in arrest and incarceration rates, some argue that African Americans and Latinos have disproportionately high arrest rates because they commit more crimes.  That’s hard to disprove in many cases because most of our crime data comes from arrests. We know far less about crimes that don’t result in an arrest – with one massive, telling exception:

Since President Richard Nixon declared “War on Drugs” in the early 1970s, the U.S. government has funded large annual surveys of illicit drug use. While no survey is perfect, these surveys, such as the National Survey on Drug Use and Health, offer a pretty solid, long-term data set regarding drug use and drug users. As it has for years, the latest NSDUH found that African 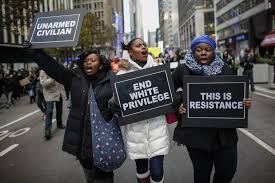 Americans use illicit drugs at roughly the same rate as whites.

Logic would suggest that arrests for drug use should parallel rates of use, with white and black drug users being arrested at roughly the same rate. But reality looks rather different. African Americans are more than twice as likely to be arrested for drug offenses as their percentage of the population would indicate. And, as the Washington Post pointed out a couple years ago, the disparities are even starker for marijuana arrests. Given that only a tiny percentage of drug users ever get arrested, one could make a case that the greatest risk factor for being busted on drug charges isn’t using drugs – it’s being black.

Why these racial patterns persist in law enforcement is a matter of ongoing debate, but persist they do. These examples from criminal justice make up just one set of evidence out of many I could cite showing that white privilege remains real, despite the passionate desire of many to wish it away.