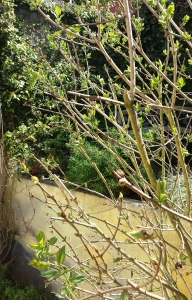 Folks around here know I’m an avid gardener. And as I’ve looked around my little garden during the last year, a trend has emerged. Last spring came early. This winter came late and stayed for about five minutes. San Francisco had temperatures hitting the 70s in February.

For those of you in warmer climates, please understand: San Francisco temperatures often fail to break into the 70s in August.

Things. Are. Not. Normal.

Exhibit A: The photo on the left is a lilac in my back yard. It normally starts to grow and get ready to flower around the beginning of April. This year it decided it was spring at the end of February – because that’s what the temperatures were telling it. Meanwhile, our drought keeps getting worse. Seen any decent rain around here lately?

Yes, I know it’s hard to tie specific weather events to climate change. But scientists are pretty clear that our freakazoid heat in California and the record-setting cold and snow on the East Coast are related. And they’re getting a clearer picture of how human carbon emissions from burning gasoline, coal, etc., contribute to global warming and how that in turn worsens our drought.

Happily, climate deniers don’t find as wide an audience here as they do in other parts of the country. But Big Oil – often laughably posing as a friend of working families and the poor – remains the biggest lobby in California, outspending such heavy hitters as the Chamber of Commerce. Most of that spending goes to weaken California’s smart climate and clean energy laws and to fight meaningful restrictions on fracking.

We know better than to fall for their lies. Climate change, the drought and air pollution hit low-income communities first and worst. And California’s smart policies to cut pollution and promote clean energy are not only cleaning the air, protecting health and reducing carbon emissions, they’re creating good jobs and economic opportunities for folks who’ve had far too little of either.

Can you take five minutes to help us get the word out? Visit UpLiftCA.org to learn what’s happening in real neighborhoods around our state. Then send a link to everyone you know. While you’re at it, visit California Delivers and sign up as a supporter.

We can fix this. But no one’s going to do it for us.