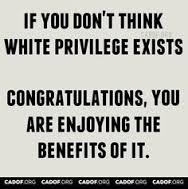 Watching the online discussions about police shootings, the massacre at Charleston’s Emanuel African Methodist Episcopal Church and the Confederate flag reminds me that a lot of white Americans haven’t the faintest clue about how privileged whites have been and still are in U.S. society. It’s easy to say “I don’t see race” if you’re part of the politically and economically dominant racial group, but if we’re to heal this nation’s wounds, white people need to see race.

As a small step in that process, I herewith offer a small case study in white privilege. For simplicity’s sake, I’ll base it on the life of someone I know pretty well: me.

Like all of us, I am very much a product of the family I was born into. My parents, both white, grew up in New York City in the 1920s and ‘30s. My grandfather owned a paint store, and made a good, middle-class living. My dad went to Cornell University and Harvard Medical School. While those institutions, to their credit, did admit African Americans at that time, economic circumstances and lack of educational opportunities for blacks in much of the country kept their enrollment overwhelmingly white.

After my dad finished serving in World War II, my parents settled in the newly-sprouting community of Inglewood, just north of Los Angeles International Airport. Like most of L.A.’s middle-class communities at the time, Inglewood was all white. African Americans and Latinos were consistently redlined out of this and other affluent and up-and-coming neighborhoods, property values in the areas they could live kept artificially low by discrimination, poor city services and lack of access to affordable mortgages and home loans. The Federal Housing Administration, which made home mortgages possible for millions, officially promoted redlining in its Underwriting Manual. You literally couldn’t get an FHA loan for an integrated neighborhood.

As with many young families, my folks’ home was their primary financial asset. The value of that home grew, while black families in places like Watts didn’t do nearly as well.

When, in the wake of fair housing laws, African Americans began moving into adjacent neighborhoods, my family joined the “white flight” to an even more affluent neighborhood on the Palos Verdes Peninsula. While we were house-hunting, I vividly remember a real estate agent cheerfully telling my parents about the tricks and deceptions he used to ensure that black families could never buy a home in white neighborhoods, regardless of what the law said. The home my folks bought in P.V. quintupled in value in just over a decade.

I went to Rolling Hills High School where, out of about 2,000 students, there were two black kids, one Latino and maybe three dozen Asians. It was just assumed that if you were reasonably bright you’d go to college, and lots of my classmates ended up at elite schools like MIT, Harvard and CalTech. We had AP classes (then a fairly new innovation) and pretty much all the support you could ask for. I shouldn’t need to say that the black and Latino kids in East L.A. had n 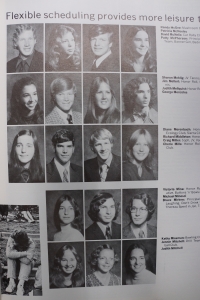 Meanwhile, after settling down in Inglewood, my dad became a partner in the Ross-Loos Medical Group, which had started in 1929 as America’s first HMO. While I’m not aware of any conscious discrimination at Ross-Loos, the partners were all white. It was considered fairly remarkable in the late 1960s that they actually had a black physician on staff.

After I graduated from college, Ross-Loos was sold to a larger corporation, and the partners all made a bundle. That and the accumulated value of their home left my parents secure enough financially that they could travel to Europe, retire with no financial worries and help out their kids whenever any of us needed it. And believe me, we needed it, as we all had crazy career ideas and not a lot of financial acumen. The Bank of Mom and Dad rescued all of us at one time or another.

Literally everything I have today – my career, my home, and what financial security I have – stems directly from opportunities my parents and I had that simply were not available to most Americans of color. That’s not to say they didn’t earn their success – they absolutely did. But doors were open for them that were bolted and padlocked shut for millions of nonwhites. The same goes for me. To deny that reality is to deny history.

But there’s more. When I was in high school, my dad drove a Mercedes-Benz, back when such cars were much rarer. After getting my license, I drove that car occasionally to see friends, go to the library, etc. I never, ever had trouble with the police. Now picture a black 17-year-old driving a new Mercedes through an all-white suburb. Do you get my drift? I have never, ever, been pulled over because I “looked suspicious,” or treated like a probable shoplifter the moment I walked into a store. But even now, such things happen to black Americans (and other Americans of color) all the time – sometimes just an annoyance, but sometimes leading to an arrest on dubious charges, a criminal record, and occasionally far more tragic consequences.

My story is not unusual. I present it not to wallow in liberal guilt, but simply to illustrate a fact that most white Americans rarely ponder: It’s much easier to pull yourself up by your bootstraps if you actually have boots.