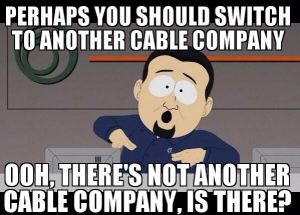 When I first started in my field and people asked me what I did for a living, I’d tell them, “I practice telecommunications and antitrust law on behalf of consumers.” I quickly learned, however, that if you need to make someone’s eyes glaze over in a matter of nanoseconds, one really effective method is to tell them that you practice telecommunications and antitrust law on behalf of consumers. So now when people ask me what I do for a living, I say, “I fight Comcast and Verizon and AT&T all day long.” People universally respond, “That’s awesome! I hate Comcast (or AT&T, or Verizon)!”

That is an example of one of the primary challenges of my job—taking somewhat wonky or technical or legal concepts and translating them into actual English. After all, it doesn’t matter how strong my arguments are if no one can understand them. For example, take a look at this statement:

The proposed transaction will give Comcast increased market power which will result in a potential decrease in downward pricing pressure for Voice over Internet Protocol services.

Something only a lawyer could draft, right? It hits all the legal/technical writing requirements: it sounds impressive, it seems really wonky and complicated, and it starts putting you to sleep about four words in.

But look what happens when I pass it through the wonk-to-English filter:

“The merger will decrease competition and allow Comcast to raise its prices for digital phone service.”

However, imagine that in an alternate universe, I’m an attorney working for Comcast (trust me, it’s a pretty terrible alternate universe). From where that attorney is sitting, the first sentence is far superior, because if you’re not a telecommunications wonk, you’re going to lose interest in reading that sentence before you even figure out what it means. As a Comcast attorney, I’ve got a huge incentive to present my arguments in overly complicated, wonky legalese. It lets me make grandiose statements like “Comcast is planning to expand its low-cost broadband indefinitely,” which sounds great until you realize that “indefinitely” means “an undetermined amount of time,” which means that Comcast could shut down that program tomorrow. It allows me to avoid discussing specifics, because can I state that “according to general economic principles, this kind of merger will be good because of [economic gobbledygook],” without ever actually addressing the actual economic effects of this specific merger. Finally, to quote John Oliver (who put it better than I ever could), “if you want to do something evil, put it inside something boring.”

At this point, you’re probably asking, “What’s this got to do with the first paragraph of this blog post?” Well, as I’m always saying around the office, telecommunications policy may be complex, but it’s not difficult. It boils down to a few basic questions, really: should everyone in this country have access to affordable broadband? When you pay for broadband service, should you get the speeds and service quality you were promised? If you’ve paid for broadband service, should your provider be allowed to decide what content you can and can’t see? If you don’t get those things, shouldn’t you have the ability to switch to another provider?

The simple fact of the matter? Comcast can’t.