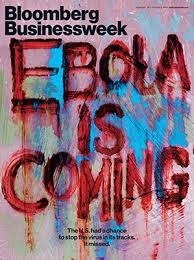 Have you heard anything about Ebola lately? Dumb question, I know. As I write this, Ebola stories are at the very top of the page on Google News and on the home pages of Huffington Post, Fox News, NBC News, the Los Angeles Times, and probably every other news site you can name.

I’m not saying that the media shouldn’t cover Ebola, which is causing massive misery and death in a handful of West African countries. It’s important and deserves attention, though not the hysteria we’ve seen in some quarters.  But let’s get some perspective here. Ebola has caused, in total, precisely one death in the United States. At present, one other Ebola patient, Dr. Craig Spencer, is being treated in this country, while three more – two nurses who treated our one Ebola fatality and a cameraman who worked for NBC News in West Africa – have successfully recovered.

Meanwhile, in California alone, 7,877 people died of diabetes in 2012. And diabetes was only the #7 cause of death, ranking well below respiratory illness and heart disease, among others. I dare you to find a story about diabetes on the front page of any news site today.

I bring this up by way of saying that what you see, hear or read in the news may not actually be the things happening on any given day that are most likely to affect you. I was reminded of this recently when talking to reporters about our new report on San Francisco hospitals’ community benefit spending. A reporter who must remain nameless explained that – even though he thought what we were saying was important –  it would be hard for him to cover because it’s not the kind of story that generates clicks online, and reporters whose stories don’t generate clicks can soon find themselves out of a job.

It’s not like our efforts were totally ignored. My colleagues Carla Saporta and Lauren Valdez landed a column about the report in the San Francisco Chronicle, and there’s been a bit of other news coverage. But trust me, you will hear and read a LOT more about Ebola. Ebola stories get clicks and TV ratings.

One of the points our report makes is that hospitals could do more to help their communities address the social and environmental factors affecting health – nutrition, exercise, unsafe living environments, etc. – that contribute to the high rates of many of those leading causes of death. Such efforts could save many more lives than will ever be impacted by Ebola in this country, as tragic as the epidemic is in Africa.

But they don’t get clicks.