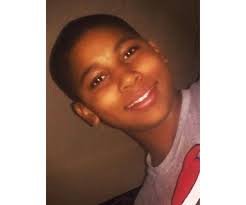 On Monday night the county grand jury investigating the shooting of unarmed teenager Michael  Brown by Ferguson, Missouri police officer Darren Wilson decided not to indict the officer for the shooting.  For millions of black and Latino Americans, this was no surprise.

The story isn’t over, of course. A federal civil rights investigation continues, and it could lead to action against Wilson or others for civil rights violations.

Not having seen all the evidence, I’m reluctant to second-guess the grand jury’s decision, but I can’t help wondering whether the outcome would have been the same if Michael Brown had been white. Maybe it’s that over the weekend, another black kid, 12 year old Tamir Rice, was shot by cops in Cleveland while carrying a toy gun after he didn’t respond to a police order to put his hands up.  According to the BBC’s report, Tamir “did not make any verbal threats nor point the gun towards the officers.”

As has been pointed out again and again – notably in Michelle Alexander’s “The New Jim Crow” – we have two systems of justice in this country. If you’re white, wealthy or well-connected, the justice you experience is profoundly different and far gentler than the system that will get its hooks into you if you’re poor, nonwhite or live in the wrong neighborhood.

And those differences don’t stop with an increased likelihood of jail or being on the wrong end of a police bullet. If you live long enough to serve out your sentence, you may face a lifetime of new barriers: denial of public benefits or student financial aid, inability to be licensed for certain trades or professions, denial of voting rights in many locations, and more. All of these “collateral” punishments fall mainly on people of color and the poor, far out of proportion to any difference in actual criminal behavior, and it all goes to compound the racial and economic inequities that ripple through our society and that too many of our leaders still pretend aren’t there.

Still, we see glimmers of hope. Here in California, voters just brought a small measure of sanity to our criminal justice system by passing Proposition 47, which changed some relatively minor, nonviolent offenses from felonies to misdemeanors.  Perhaps most encouraging was that Prop. 47 gained broad support, even from some in law enforcement, and relatively little opposition.

Prop. 47 was just a start, but it was a start. The system that led to the tragedies of Michael Brown and Tamir Rice will not fix itself, but human beings can fix it. We must.