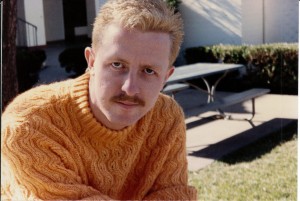 Much discussion of the Affordable Care Act, aka “Obamacare,” involves whether young adults – who may feel like they’re so healthy they don’t need insurance – will buy coverage. I’ve seen why it matters. More than 20 years later, it still hurts.

His name was Tim. He was the center of my world. He was young, strong and just turning 31 years old. He seemed invincible — until the day in early 1992 when he was diagnosed with inoperable cancer of the liver and pancreas.

I will spare you the story of how he ended up in this situation without health insurance, except to say that it involved unbelievably horrible behavior by his employer, a large Los Angeles hospital known for treating movie stars. But uninsured he was, at the moment he needed it most, a moment no one saw coming.

Here’s where it gets rough. Tim was a nurse. He’d worked in the hospital’s oncology unit, so he knew exactly what was coming. His condition was definitely terminal, and he had no desire to prolong the misery with chemotherapy and the nausea, vomiting and hair loss that was pretty much unavoidable with the chemo drugs of 20 years ago.

Tim made the decision – painful for all of us who loved him, but entirely rational – that when his physical condition started to become unbearable, he would end his life himself rather than endure the final tortures. I think more than anything he dreaded spending his last days hooked up to machines in the grim confines of chronically underfunded L.A. County/USC General Hospital, where uninsured patients in the central part of L.A. usually wound up.

Tim reconciled himself to death much more easily than I would have. But he had no way of obtaining pain relief other than over-the-counter headache remedies. And anything like hospice care or home nursing to help him live comfortably as the illness progressed was out of the question, since there was no way to pay for it. He didn’t complain — Tim never, ever wanted people feeling sorry for him or putting themselves out personally or financially to help him – but I know his final months were agony.

The end came on February 14, 1993, by Tim’s own hand, as he’d planned.  I have very little doubt that he would have held on longer had he had access to pain control and home nursing. And I know beyond question that his last months wouldn’t have been the torture they were if he’d had health coverage.

Now, thanks to the Affordable Care Act, you have the opportunity to buy insurance that’s affordable (with help available if you’re low-income) and has a guaranteed package of solid benefits.  But hey, it still costs money, and you might easily think, “I’m young. I’m healthy. I don’t need health insurance.”

Tim can’t tell you, but I can.