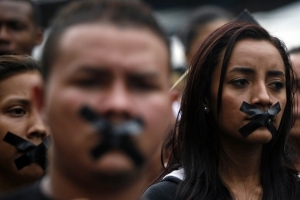 Dear certain justices on the Supreme Court (you know who you are):

I want to acknowledge that today was a great day for the Supreme Court.  Long ago in civics class, we all learned that the Supreme Court’s function was to protect the minority from the “tyranny of the majority.” You examined the Defense of Marriage Act—an act whose stated purpose was to discriminate against same-sex couples—and boldly stated that this sort of discrimination is unacceptable. Thank you.

That being said, I’ve spent some time trying to make sense of some of your other decisions—specifically, the decisions you handed down Monday and Tuesday.  I have to admit, I had some difficulty. The rulings, individually, were certainly regressive, deliberately ignorant, and racist, but it was more than just that. And for the life of me, I couldn’t figure out why.

Until I saw this. One woman, speaking out for millions of women that the Texas legislature would much rather ignore. And that’s when it hit me. Your decisions have a common thread—stifling the voices of people whose ideas make you uncomfortable.

We, our partners, families, and communities are the victims of harassment. We’re going to continue demand safe and non-discriminatory places of work. No matter how hard you try to take away our voices, we will not be silent.

We, our partners, families and communities have been unjustly and illegally prevented from pulling the levers, pushing the buttons, and checking the boxes that determine the path our country takes. Despite efforts to stop us, we’re going to register and vote in greater numbers than ever. No matter how hard you try to suppress our votes, we will not be silent.

We’re overflowing with ideas about how to change society to make it better—a system where equity trumps privilege, no one is left behind, and everybody prospers. We’re sure that you’ll find some of those ideas a little scary and you’re going to do your best to prevent us from disseminating those ideas. That’s too bad.

We are the new majority.

We’re going to voice those ideas, no matter what you do.

No matter what you do, we’re going to speak.

Are you going to listen?