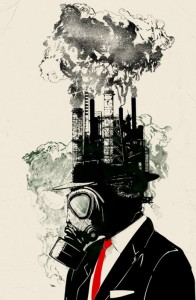 Last week my colleagues Miya Yoshitani and Bill Gallegos penned a column that highlights a disturbing yet all too familiar tactic that is being employed by polluters in California – Astroturfing.  This term refers to industry groups, in this case the Western States Petroleum Association and the California Manufacturers & Technology Association, spending millions of dollars to fund front groups in an attempt at deceiving the public with their “sky is falling” messaging.  In public, they claim to want to see AB32 – California’s landmark climate change and clean energy law – succeed, but privately oil companies spent over $10 million in 2012 lobbying to delay and weaken California’s clean energy laws.  Stall and delay…sounds familiar.  Shady, right?

I spoke on a panel last week where I and several others called out these deceitful tactics.  Thankfully, Susan Frank, a conference attendee, did not let them off of the hook when WSPA used rhetoric implying that all businesses joined them in opposing the successful implementation of AB32.  As you see in the video, WSPA’s President, Cathy Reheis-Boyd quickly apologized and took it back.  This exchange is why I was particularly delighted to see the piece by Leonard Robinson, of EnviroBro fame, and Ruben Guerra of the Latin Business Association, highlighting that not only do California’s ethnic-owned businesses support our efforts to combat pollution, but that business leaders in our community see the great potential of bills like SB 535 (de León) to “Greenline” communities that have historically been redlined by directing a significant portion of clean energy investments into communities that need them most.

After President Obama’s inaugural address, we were hopeful that Washington would finally initiate meaningful action to fight climate change.  Senators Boxer and Sanders introduced legislation to  help communities hit hardest by pollution.  But guess what?  In California, this isn’t just proposed legislation, it’s the law.  SB 535, signed last year by Governor Jerry Brown, will give communities that have been hit first and worst by pollution with first and best solutions to reverse pollution’s impacts.  In short, SB 535 and California carved a path for the rest of the nation.  The nation is following in California’s demographic footsteps and everyone else will soon figure out what we have known in California for years: Most people of color consider ourselves environmentalists.  Fighting pollution in our communities helps all of us fight climate change.

The big takeaways?  We are not going to be fooled.  Greenlining’s vision of corporate responsibility and leadership requires accepting responsibility for your actions, transparency and candor, and taking proactive steps to meet new challenges head on.  These days, Californians demand this of our corporate leaders.  Is big oil going to get on board?  If not, they will lose market share to those ready to innovate.