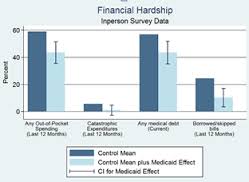 The Oregon Health Insurance Experiment has received a lot of media attention with the release of research findings in the New England Journal of Medicine. This groundbreaking study marked the first time researchers could use a randomized, controlled design to evaluate the impact of Medicaid, our nation’s health care program for low-income individuals and families (called Medi-Cal in California).

Of the 90,000 people signed up for Medicaid, Oregon’s underfunded program could only enroll about 30,000, forcing low-income Oregonians into a lottery system for health benefits. This effectively turned poor Oregonians into lab rats, with one group randomly chosen to enroll in Medicaid and the others left out.

If that sounds a little creepy, it is. Nonetheless, this study is one of the most important studies in American health policy in recent years, and it will play a major role in crafting health policy for many years to come.

Most commentary  either argues that the study proves the necessity for Medicaid, or claims the mixed results prove for sure that “Obamacare,” or the Patient Protection and Affordable Care Act (ACA), will fail. The problem with this argument: Medicaid in and of itself does not improve health; it helps protect the lowest income Americans from going bankrupt when they need to see the doctor or have a catastrophic emergency. It allows low-income Americans to not stress about paying their electricity bill because they needed to buy their asthmatic child an inhaler.

In fact, the researchers found that enrollment in Medicaid alleviated measures of financial strain, including reducing by more than half the likelihood a person would have to borrow money or not pay a non-health related bill. Thus, Medicaid helps provide peace of mind.

So it’s no surprise that the study found a lower rate of depression and increased use of preventive care in the Medicaid group. While researchers found that Medicaid had no statistically significant effect on measured health outcomes (blood pressure, diabetic blood sugar control, and cholesterol), the study did find that having access to health care because of the lottery significantly increased the probability of a person being diagnosed with diabetes and then going on to take the necessary diabetes medications. That ultimately saved the health care system money in unnecessary and expensive care.

Obamacare as a policy will not make people healthier. In reality, that is not its intended purpose. The ACA’s purpose is really to reorient the health insurance market to protect consumers. In some ways, it might be better to refer to the ACA as financial reform just as much or more than we refer to it as health reform. Can Obamacare improve health? Sure, because it has elements that encourage prevention and policies that get to the underlying root causes of poor health: where people live, work, and play. States can even choose to integrate prevention into their implementation efforts, as California’s Health Benefit Exchange, Covered California, has done in making prevention a key element in its implementation efforts.

So does the Oregon Experiment prove that Obamacare will succeed? No. But it does show the importance of insurance acting as a safety net that can prevent financial ruin. It also demonstrates that with access to health services, consumers will utilize preventive care, manage their chronic illnesses, and decrease their depression levels—all factors that over time will improve a person’s overall health and drive down costs in the system. I would say that makes for a pretty major finding.