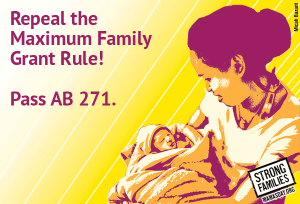 Thanks to a decades-old law called the “Maximum Family Grant,” California’s CalWORKs program punishes babies for being born poor and, by extension, punishes their entire family. CalWORKs is California’s welfare-to-work program, and its cash grants allow families to survive while adults seek work. It’s this survival money that’s at stake.

Under the Maximum Family Grant rule, a CalWORKs family who has been receiving aid over nine months can’t receive additional aid upon having a baby—unless the mother can prove that she was sterilized, using an IUD, or on the Depo Provera shot.

The message there is loud and clear: legislators two decades ago feared that impoverished families would try “gaming the system” by having more children. If you’re wondering who in their right mind would have a baby to get a $122 check from the government, you’re not alone. The whole idea is rooted in outdated stereotypes about poverty and race that have nothing to do with the very real burdens of low-income families.

For the record, government studies quickly refuted the unfounded claim that restricting aid would lead to fewer children. What’s more, women receiving public benefits have families of one to two children on average—a figure consistent with the general population’s birthrate. That means that the Maximum Family Grant rule serves no purpose except to punish poor families.

We finally have the opportunity to make this right. Advocates like California Partnership and the Western Center on Law and Poverty are working hard to pass AB 271, a bill which would repeal the Maximum Family Grant rule.

As someone who works for a racial justice organization, I want to emphasize how critical this bill is for communities of color.

The context of this is unpleasant. For decades, the government involuntarily sterilized or otherwise coerced women—especially women of color and low-income women—into sterilization. California once held the shameful distinction of performing one-third of all government-funded sterilizations in the US. And sadly, coerced sterilizations are still not a thing of the past.

The Maximum Family Grant rule, with its encouragement of sterilization and long-lasting contraception, is an echo of ugly policy that allowed only certain classes of families to have children.

Today, race still matters. Most of the women affected by the Maximum Family Grant rule are women of color—54.7% are Hispanic, 22.1% are Asian, and 17.4% are black. The rule also disproportionately affects families with less English proficiency. In a state where people of color are the majority, it’s no surprise that these are the faces of families who are punished for having children.

We should be helping families leave poverty through saving and building assets. Asset-building is key to fighting the persistent racial wealth gap that hurts our entire nation. But under policies like the Maximum Family Grant rule, families will slide deeper into the poverty cycle. These kinds of laws can increase the poverty rate of children by 13.1%.

In fact, women whose welfare benefits were capped reported higher levels of family hardship and distress, including heightened housing and food insecurity. Their hardships ranged from difficulty buying diapers to increased hospitalizations of their children.

No matter how you look at it, the Maximum Family Grant rule is bad for families and an embarrassment for California.

The good news is that we can fix this. The fight isn’t over and there are many ways to get involved: