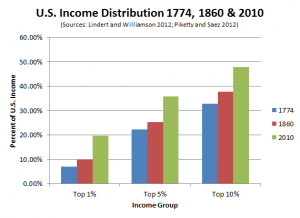 Later this month, pundits and politicians from President Obama on down will mark the 50th anniversary of Martin Luther King Jr.’s “I have a dream” speech, delivered  at the August 28, 1963 March on Washington for Jobs and Freedom. To all involved, I have a simple request:

Please don’t censor Dr. King. Don’t remember just the warm and fuzzy parts of his legacy. Honor the side of King that was challenging and provocative and radical.

We like to look at beloved historical figures through a soft glow that blurs out uncomfortable details. For Dr. King, that means embracing the things he said that no one would dare disagree with today, like the iconic, “I have a dream that my four little children will one day live in a nation where they will not be judged by the color of their skin but by the content of their character.”

But King didn’t stop there. Over the years he came to understand that equality under the law means nothing without economic justice, that poverty shackles people every bit as much as Jim Crow segregation did. He organized the  Poor People’s Campaign in 1967, and spoke out strongly about economic inequality. He denounced an economic system that he described as “socialism for the rich and free markets for the poor.”

“True compassion,” Dr. King said, “is more than flinging a coin to a beggar. It comes to see that an edifice which produces beggars needs restructuring.” He was right. And his words are just as true today as they were then. Income and wealth inequality continue to grow, with more and more wealth concentrated at the top. As the New York Times noted recently, the damage from this inequity ripples through our whole society, from school performance to infant mortality.

King, of course, is far from the only historical figure we’ve tended to water down and sanitize.  Americans prefer to remember the warm and humorous Mark Twain of “Tom Sawyer” and “Huckleberry Finn,” and not the blistering critic of war and of U.S. and European imperialism. We happily remember the Franklin Roosevelt who lifted us out of the Great Depression and defeated the Nazis, but forget the scathing critic of economic inequality. That Roosevelt peppered his 1936 convention speech with statements like this: “For too many of us the political equality we once had won was meaningless in the face of economic inequality. A small group had concentrated into their own hands an almost complete control over other people’s property, other people’s money, other people’s labor — other people’s lives.”

Dr. King, like Roosevelt and Twain, is important because he challenged us. He forced Americans out of our comfort zones and pushed us to look at aspects of our society that make us uncomfortable. That’s why he matters so much, and it’s something we should never, ever forget – especially on August 28.