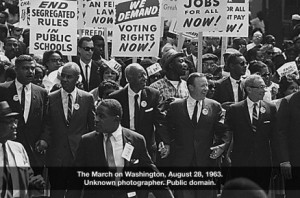 Today the U.S. Supreme Court struck a small blow for sanity, but the most critical rulings affecting civil rights are still pending. We’ll be watching those rulings closely in the coming days.

The high court struck down an Arizona law that undercut the National Voter Registration Act, a federal law designed to make registration and voting easier and more accessible. The law involves use of a specific voter registration form that, among other things, asks voters to affirm that they are U.S. citizens. Arizona added an additional requirement, demanding that voters produce proof of citizenship, such as a birth certificate.

Civil rights groups rightly viewed this as unnecessary and burdensome – lots of citizens don’t have such documentation readily accessible – and thus likely to interfere with voting rights. But the court avoided those questions and focused on a simpler point:  The federal law preempts state law, and that’s that.

So this tells us little about what the court will do about Shelby County vs. Holder, which endangers critical provisions of the Voting Rights Act. In states or localities that had a long history of using phony literacy tests and other tricks to keep people of color from voting, the law requires them to get pre-approval from the federal government before making any changes in voting procedures. A ruling overturning that law could be disastrous. With a number of states trying in recent years to make voting more difficult – restrictions that sure look like they’re meant to disenfranchise low-income voters and people of color – this case could make it easier for states to erect obstacles to voting.

Also still awaiting a decision is Fisher vs. University of Texas, which challenges the use of race in affirmative action. In prior rulings, the court has said that race can be one factor among many used in promoting diversity in college admissions, and a ruling doing away with that option is a real and disturbing possibility.

In California, we’ve seen what happens when you strike down affirmative action in college admissions.  When voters outlawed affirmative action in 1996, the number of African Americans, Latinos and Native Americans at UCLA and UC Berkeley – the University of California’s most selective and prestigious campuses – dropped by more than half and never fully recovered.

Doing away with affirmative action can only worsen America’s huge and growing racial wealth gap. For every dollar a white family in America owns, the median Asian family has 63 cents, the median Latino family has about seven cents, and the median African American family has less than a nickel. We simply cannot build a strong, prosperous country with that level of inequality.

These cases will have a profound influence on all of the racial equity issues we address here at Greenlining. We’ll be watching, so keep your eyes open for our analysis.